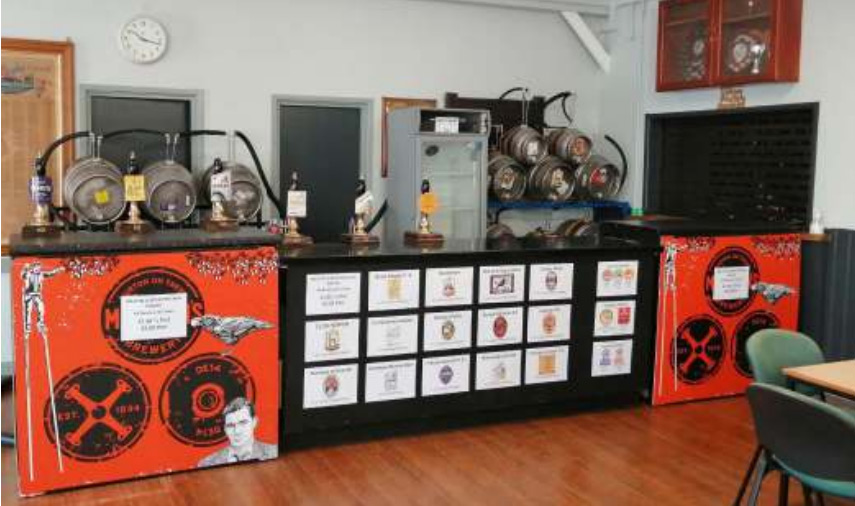 Friday morning The bar is all set up (except an empty fridge where the ciders should go – they arrived last minute the morning of the festival itself!)

It was good humour, happiness and a joy to be out and about that was the overall feeling at the 2021 Mayfield Beer Festival, that took place at the Memorial Hall in early August soon after lockdown restrictions were eased. …..well that and a chance to try award winning craft beers from across the UK from Cornwall to Cumbria via London, Southampton and closer to home Burton-on-Trent. Craft beers were matched by a whole orchard full of flavours of cider and for the first time ever more flavoured Gins than Beer – 19 in total including ‘Jaffa Cake’ and ‘Watermelon Glitter’ (yep they are real flavours and the watermelon really contained glitter when you added the tonic to it).

Because of the pandemic no sponsorship was asked from local businesses.

Normally sponsorship is sought to offset the costs and increase the funds raised for the Hall, but it was decided that to ask local business’s for money during what has been a very rough time for them was unfair and that this year the festival would be funded entirely by the Hall as a pure community event, still with free entry. This required the festival to be a total success to avoid incurring losses and many a sleepless night was had by committee members in the run up to the festival weekend.

Those fears were put aside when the doors opened on the Friday night and villagers poured in to get their pints poured (excuse the pun there) and the bar did not stop until late into Sunday evening, when many of the beers, ciders and gins were literally sold out.

Friday was a get to know your beer night with serious festival goers, carefully ticking off the beers they had tasted in half pint measures, sitting alongside those just out for a pint or two whilst chatting to friends and neighbours.

Saturday was more relaxed as a family day with the doors opening at 1pm and closing at midnight. Saturday proved busy from the start and it seemed the whole village popped in at some point in the afternoon or evening with a peak just around the time Nigel’s Butchers fired up the barbecue around 5pm.

After sampling top quality fare, they all stayed on for the live music from Paul Gibson. It was the first time live music had been at the hall for what seemed for ever and Paul did three sets instead of his normal two with the third set when he played requests getting the hall really up and dancing, who knew the hits of Madness could be so popular?

First a Saturday night drink and then a bop to finish off!

Sunday, normally the quiet, wind down day was this year as busy as any day. Perhaps it was the quality of the beer or the chance to be out and about or both, but at the end of the three days a magnificent £5,000 was in the tills – enough to pay all the costs and help top up funds for ongoing maintenance and refurbishments. It may have been billed as a POP-UP festival but there is no doubt that Mayfield Beer festival was back with a bang. As we always say at this point it could not simply have happened without a dedicated band of volunteers and rganisers and of course the good people of Mayfield. See you next year, pandemics permitting!