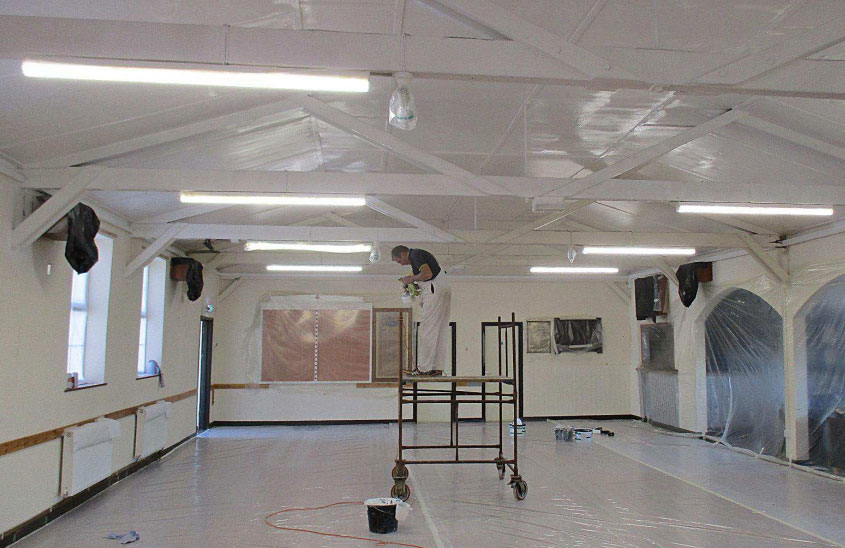 It Took:-
• 28 tubes of sealant,
• A highly specialist spray gun,
• Rolls and rolls of plastic sheeting and masking tape
• A full scaffolding tower,
• More tins of paint than you could shake a stick at

and eight solid days of work from Simon (with help from Graham who came back early from his holiday to help finish the work) and then it was done – the largest single piece of refurbishment we have undertaken at the hall in one go.

And it has transformed they main hall into a modern, light and up to the minute space. The old magnolia paint has been replaced with a pure white ceiling and light grey (or blue depending upon your eyes and viewpoint!) walls that makes the hall seem bigger and lighter than ever, well worthy of our village.

First seal all those small cracks and gaps in the ceiling! Simon knew it would be a bit of a job at the very start of the project, but 28 tubes of sealant later he realised it was more than just a bit of a job. As well as immediately making the ceiling visibly better it will save us on our heating bills this winter and make the whole Hall much more energy efficient. Whilst up there Simon investigated the roof space between the ceiling and the tiles (it’s not been looked at for years) to discover, thank goodness, that it was dry and pest free, so no unexpected expenditure there! The first stage was complete.

Next cover every surface with plastic sheeting, or dust sheets, especially the wooden floor, (Alf would not like his lovely polished wooden floor covered in paint splatters). It’s the most time-consuming part of painting but preparation and the size of the hall meant that we were most grateful for the donation of those rolls of plastic sheeting. Every single surface had to be covered including all the light fittings and all the plaques and memorial tablets attached to the walls.

Once that was done Simon could get to work with his new fancy spray gun that was more the size of an air rifle and when full of paint was of quite some weight. However, it did the job, getting paint into all the small areas around the beams with a nifty device that blew away dust and cobwebs just before the paint hit. It meant a massive job painting the ceiling could be reduced to a reasonable time and one man could do it all.

The transformation in the ceiling was startling. Pure sparkling white and suddenly the whole hall looked much larger. Then it was down to painting the walls and here Simon was joined by Graham (and his dog), returned early from his holiday in order to help get the job done. And just one week and a day after starting the hall was back open for business with the groups and people using it immediately commenting on the transformation. Another step forward for the Memorial Hall.